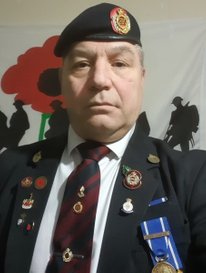 Since leaving the Army I took up a job as a Security Office where I managed to be a part of the security detail at William & Kates Wedding, I was part of crowd control next to the Abbey.

Since I was last on air back in 2017 I have attended 3 Invictus Games Trials to hope one day I would get picked for the games.

Then I took up Archery and become a Level 1 Coach in the sport.

That is just a little bit about me.

My Favourite Song is Pledging my Love by Elvis Presley