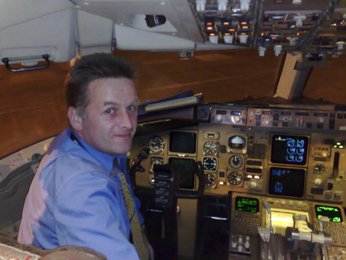 Kenny has been an avid listener and continues to be to VRN for a few months since joining the site a few months ago.

He became interested in becoming a DJ at age of 17 (yes, he can remember that far back) through a friend who took him to the pubs and clubs and showed him the ropes, even letting him take to the decks whilst he was otherwise engaged and away from the decks.

Kenny continued his interest part time but did some sets in pubs and clubs before a friend in Leeds asked if he would do some online radio work for their party nights. Kenny readily agreed and threw himself back into it playing sets most evening and weekends. He played mainly club music, but did the occasional 60s up to 90s sets during the day.

Kenny enjoys a wide variety of music but Rock and Metal are his favourites. Nightwish a particular favourite.

Kenny served 12 Years in the Royal Air Force as an Assistant Air Traffic Controller doing tours at Kinloss, Scottish Centre at Prestwick, Brize Norton and finally a tour on 202 Sqn E Flight Search and Rescue based at the Defence School of Transport at Leconfield near Beverley in the East Riding of Yorkshire.