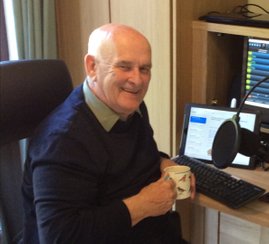 What you might ask is he doing on here! Mac is a local Minister and Pastor of a church in Barnsley Yorkshire, and recognised that there is no faith element in the VRN broadcasting schedule.

Mac says he joined the Army at 15 as a Boy Soldier in 1965 (now that gives his age away!), and spent 15 years serving in total, first in the RCT and then REME, Happy Days! - Finishing his Army career as a Sgt having done many things including driver, Storeman, Recruiting Sgt, and Drill Pig at Depot- (Well somebody had to do it)! - with postings mainly in BAOR, Cyprus, N.I. of course, and UK.

Second Career in Social work, Mac is now retired, but focusses a lot of time on his sport Walking Cricket. - Did a stint as a mobile DJ for some years, graduating to Hospital Radio, Mac only found Veterans Radio Net recently, and decided to join up! He Is Married to his dear wife Maureen, with children and grandchildren everywhere!

Follow Mac on Sunday evenings for Sunday Faith Hour, for a mixture of Traditional Hymns, and Modern Worship music.

My song? Well I have only this year come across this beautiful classic: