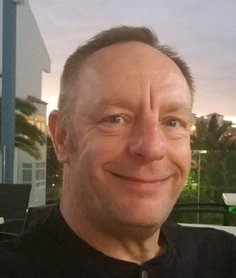 My interest in Aircraft led me to join the Air Cadets in my home town Redcar and at the ripe old age of 16 I joined the RAF in April 78, after completing my basic and trade training I was posted to RAF Marham for my first tour as a Firefighter. I returned to Marham for a second tour in 87. I spent 24 years as a Firefighter and finished my service at Waddington in February 2002. I worked with all aircraft in service from the Spitfire right up to the introduction of the Typhoon, my service took me around the globe and to countries that most people only dream of visiting.
I started presenting radio shows with BFBS (Forces Radio keeping you in touch with home ) in 1993 whilst on deployment in the Falkland Islands, I did a further 3 tours there and presented each time, added to this I also presented with BFBS in Kosovo & Macedonia. I’ve presented on Hospital Radio and currently present for Anglian Hits Radio.
My music of choice is Dance, Soul, Jazz Funk, Garage and most things with a Heavy Bass but my absolute musical passion is for Soul II Soul? Their motto is A Happy Face, a Thumping Bass for a Loving Race and if I can bring that to VRN then I’ll be happy too.
I’m a lifelong West Ham United supporter and have a beautiful wife called Tracy, Tracy helps and supports me with my preparation and presenting but hasn’t got the bug for presenting (yet!!.)