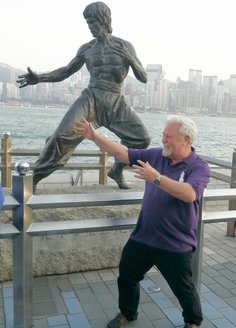 Johnny started his DJ/Radio work s a fourteen year old at his local community centre in the East End of Glasgow in the late sixties.

After joining the Royal Air Force in 1970 as a Mechanic Apprentice, he had his first experience of radio at RAF Patrington on Patrington Radio, and later working with BFBS Radio in West Germany and the Falkland Islands.

Johnny spent 24 years in the RAF fixing Radio/Radar equipment that Air Traffic broke. He finished his career as an RAF Technical Instructor.

After leaving the Mob, Johnny moved up to Brunel in Bristol to teach Aircraft Engineering. He then moved to Hong Kong as a Rugby Club Manager and taught English to Kindergarten kids.

Apart from radio, Johnny’s other passion is Rugby Union. He was also a keen Skier (far too old for all that shenanagins now) and holds a Private Pilots Licence.

Johnny loves all types of music, and his most favourite track is Simple Minds and “Don’t You Forget About Me!”

Johnny is married to Marianne and spend his time between the UK and SEA.