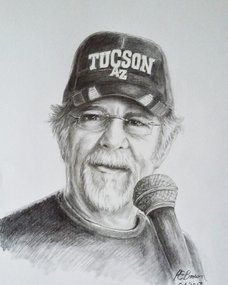 I am from County Durham but moved to Yorkshire at 15. Started in the coalmines as an  apprenticed electrician but later, left and joined RAF as Aircraft Tech Airframes (or Rigger).

Did 13 years and as a hobby, learned how to be a Radio DJ at Leconfield, Tengah and Changi.

After moving to Brize Norton, got into am-dram (no radio station) and did that for about 10 years when I went pro.

Also, at the same time, I was in two main bands and a few other band projects. This all stopped about 5 years ago, since when I have been doing the occasional solo gigs with backing tracks, open mic nights and karaoke (which I love!!).

Now living in Royal Wootton Bassett, I re-married 4 years ago to Pam who I have known since 1967! And now Retired!! :)

As a Gemini - I find it hardto choose one song as an all-time favourite! But the one I have always found very complex and interesting is 'Owner of a lonely heart' by YES.