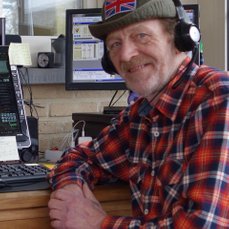 Being a WWII babe, Ken is one of the older presenters on VRN but insists he's still young at heart and says he will give anyone a run for their money providing it's pre decimal white fivers.

Ken is a lover of songs with a story plus some classical pieces, a bit of Country, Blues, decent Pop and even the odd track or two this side of the boar war but confesses to wearing earplugs, pulling the plug or destroying the radio whenever Heavy-metal, Punk and the like pollute his space.

Now resident in Belgium, Ken has learnt to speak fluent English, 4 Dutch words, 3 French one's and is now concentrating on his German studies which he says won't take very long.

Kew is also renowned for his 'Guess the Cuckoo' deliberate! mistakes.

Catch Ken Tue/Wed evening with the odd surprise at other times.