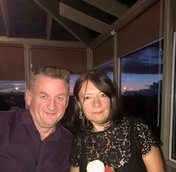 Nigel has been a keen listener and chat room member of VRN for a few months after being introduced to it by Mike McCann an old friend from his days working at BAE Systems.

He caught the presenting bug from his brother Kenny who joined VRN a few months after him.

Nigel has a wide taste in music from Abba to ZZ Top and quite a bit in between, but does Like Kiss (Reason to Live) as a particular favourite.

Nigel spent 12 years in the Royal Air Force as a Mover , doing 2 tours at Lyneham , Gibraltar and the Falkland Islands.

When on his Tour in Gibraltar he would often be heard requesting tunes on the local BFBS station, before he was asked by one of the presenters to pop in and sit in on a show with him, Sadly I did not purse that opportunity further so am making up for that now.