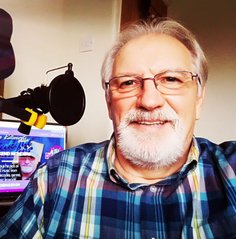 Steve has been a DJ (on and off) since he started with a mobile disco in the 70s and then as a DJ with hospital radio in the 80s and a party DJ in the 90s.

He recently returned with a spot as a reporter and presenter with Rugby and Daventry Radio and his 'Weekend Wonders Show'.

Steve's music style is from 'across the genres and across the decades'; he doesn't care when it was a hit, or who made it a hit – or even if it was ever a hit!

If it's great music and it fits the show – he'll play it.

Steve is a veteran of 30 years police service with the MoD, Metropolitan Police (Detective Sergeant) and the Serious Organised Crime Agency.

He retried in 2014 after working for HMG as an Internet Investigator.

Steve and his wife live in Central England and spend their retired years doing voluntary work.

Steve was made a Member of the Order of the British Empire in 2004 for services to police.

[So many great songs to choose from but this is one that always gets me livened up...]