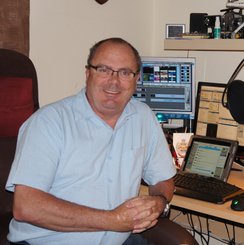 Remy has been presenting his shows on VRN since the end of 2014 and has vowed that one day he will get through a whole show without a FUBAR or SNAFU somwhere in the mix.

Remy's previous radio experience was with helping to establish an FM radio station at RAF Lyneham when he was stationed there. He originally intended to remain as part of the radio stations Editing/Technical team but was persuaded to step to the other side of the microphone as a presenter.

He spent 30 years as an Aircraft Technician working on the following aircraft:

Canberra aircraft (now out of service)

Vulcans (now out of service)

Victor Tankers (now out of service)

Tornado GR1 (now out of service)

In fact everything that Remy worked on has broken and gone out of service!